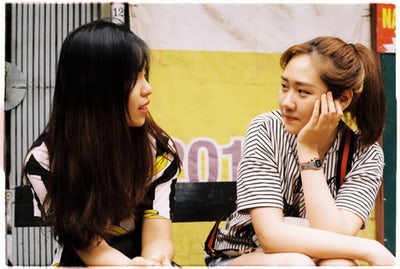 Jean Balchin
Kia ora. My name is Jean and I’ve been involved with Life Matters Suicide Prevention Trust for a couple of years. I’d like to begin this blog by telling you a story about me and my brother John, who died by suicide three years ago.

I’m the oldest of nine children - Jean, John, Andrew, Will, Jill, Lucy, Peter, Rebecca and Jack. Together with my parents, we have enough kids for a soccer team, almost enough for five-aside rugby, and more than enough for a nervous breakdown.

My childhood was messy, chaotic, and full of love. I had my usual teenage angst, and rebellious phase, but nothing serious had ever really happened. I hadn’t known real sadness, depression or anxiety. I hadn’t yet been touched by suicide.

Naturally, I was always very protective of my brothers and sisters. That’s not to say I didn’t tease them. On my little brother Will’s first day at school, I convinced him that a tube of wasabi I had was green ice-cream. He ate a whole teaspoon and began to bawl. I ran away. Obviously, this was not my finest hour. But when it really mattered, we stuck together. Playground skirmishes would sometimes escalate into full-on clan wars if someone dared to pick a fight with one of my siblings. And when my brother John began to show signs of depression, I was worried.

Three years ago, I was a second year student at Otago University. I was living in a flat in North East Valley, and I thought it would be great fun if my brother John - the next one closest in age - would come flat with me. So he moved down, and for awhile, it was great fun. We would go to parties together, and he would put me on his skateboard, and tow me home when I was tipsy and tired, and it was three o’clock in the morning. He did alright at his studies at first, but it soon became evident that university just wasn’t for him.

I’m not quite sure what happened to my brother, but a number of factors - university stress, poor sleep, anxiety, signs of developing schizophrenia, and of course being away from home - combined in him to produce severe depression, anxiety and other mental health issues. To cut a long story short, my lovely aunt and I did our best to help him. We took him to the doctors, counsellors and fed him well. He withdrew from university and headed home to work and rest for awhile. But at home, John didn’t get the rest, support and medical attention he needed. I don’t want to blame anyone for his death, and I won’t go into specifics, but his death was entirely preventable.

On the 24th of September 2014, John died by suicide. He was only 18. He was my best friend, a gentle boy who saw the best in everyone. John was the boy who befriended the outsiders. He was the class clown. He was the kindest human being I knew.

I felt like I had somehow let him down. I was in Edinburgh at the time, two weeks into a student exchange. I was on the other side of the world. I thought he was doing ok - just a week earlier, we’d been having a pretty normal conversation on Facebook. I’d ignored his most recent request to Skype.

For a long time, I refused to acknowledge the true circumstances of my brother's death. I buried the memory in the attic of my mind and desperately tried to distract myself. And then, when I too began to spiral downwards into that deep, dark pit of depression, I kept my mouth shut. I was too afraid to tell anyone that my hair was falling out in clumps, that I woke up each morning with a heavy weight on my chest, pushing me down into the mattress.

I was too ashamed to admit that I couldn't sleep, that I was beginning to hear voices, or that secretly I longed for everything to just stop. I was on the brink of suicide myself, and it wasn't until a friend confronted me with five simple words, that I realised I needed help. "Are you thinking about suicide?" she asked. I got the help I needed, and while I’m not 100% better, I am doing well, and I have a wonderful support system.

Focus on the happy memories:

I can’t ever forget the sad resolution to John’s life. life, but I can dwell on those funny, happy memories. So, here are a few:

When I was eight years old, we lived on a farm in Mangatangi. We had the most infuriating, useless chickens ever. They hardly ever laid eggs for us, and they weren’t affectionate in the slightest. John’s rooster was downright evil, and would attack us every time we left the house. However, one afternoon Andrew and I went to inspect the egg-boxes, only to find that there were twelve spotless, perfectly oval, creamy eggs nestled carefully within the straw. I was amazed. Our chickens had finally rewarded us! Andrew and I trotted home, crowing excitedly to Mum and Dad. It was only a few years ago that I found out my wily parents had enlisted John to hide a carton of eggs in our henhouse, in order to surprise us for once. He never breathed a word.

Throughout high school, I was incredibly straight laced and reserved. My rebellion was more of an intellectual one, rather than the traditional sex, drugs and rock’n’roll defiance of usual teenagers. To this end, I arrived at the ripe old age of 18 without ever having been to a party. My dear friend Sequoia decided to fix this, and so one evening I snuck out to my first party. It was ineffably strange. Inebriated teenagers were stumbling around in a muddy field, a decrepit old donkey was wandering around foraging for party snacks, and a cluster of tangle-haired hippies were hotboxing a caravan. I stood there in bemusement, watching the chaos unfold. And then, out of the corner of my eye, I saw my cheeky brother pull up on his bicycle. We made eye contact, and an unspoken agreement was made: I won’t tell if you don’t. We always looked out for each other. He was my best friend.

Finally, I was lucky enough to flat with John for a brief while down in Dunedin. It was the funniest, most infuriating time of my life. But John was always kind, sweet and gentle. Having moved on from the previously mentioned teetotal period, I would occasionally head out to town with my friends until the small hours of the morning. John would always leave his phone on in case I needed someone to walk me home. One night I called him at 3 in the morning. I was stuck in the centre of town, and didn’t want to walk through the dark, dank North East Valley by myself. Without complaining, my brother came to find me, skateboard under his arm. He placed me on the skateboard and towed me home, stopping off for refreshments on the way home. I will never forget how kind and caring John was, or how much fun it was to share a McFlurry with him, bumbling along the deserted roads of North Dunedin in the middle of the night.

It is the fear of losing more people to suicide that drives me forward. I am no longer ashamed of how my mind plays tricks on me, or the deficient levels of dopamine in my brain. Talking about suicide and mental health is a matter of life and death in New Zealand. Let's start the conversation now.

I’d like to leave you with a Maori proverb that took on great significance to me after my brother died:

What is the most important thing in the world?